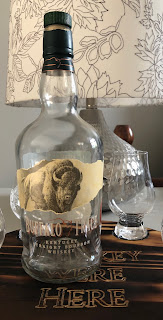 Yet, despite not being actively in the market for Blanton's, and knowing that I'm not going to find much else, I nonetheless wandered into the whiskey aisle during a shopping trip, and I saw all the usual suspects sitting on the shelf.  Then something caught my eye.  Was that a sticker?!?  I quickly pulled a bottle of Buffalo Trace off the shelf, figured I must have seen something, turned the bottle in my hands, and sure enough, it was a Jewel-Osco Single Barrel Select! I had no clue such a thing existed.  So, of course, at only $24 a bottle, I picked one up, because what the hell, why not?!?

I got home and cracked it right away, because quite frankly my curiosity was getting the best of me. On the nose I immediately got caramel and almond, almost a hint of amaretto. I also detected a certain amount of Maraschino cherry as well. Later on, after making my way through a good portion of the bottle, I got hints of dark chocolate, and it also seemed to sweeten up quite a bit, providing a rich, dark molasses note.

Flavor-wise, it seemed to follow suit with the nose. On the first few pours, I got primarily burnt sugar and oak. It was more char and wood than I expected from a Buffalo Trace. The sugars were there, but they were buried. It was as thought it wanted to be sweet but just wasn't quite there. I also got a bit of a cherry cough syrup note, which is always a bit of a turn off for me.

However, as with the nose, after a number of pours from this bottle, it sweetened up significantly. Rather than char and sugar on top of wood, it turned into something far more delicious ad interesting. I got more of a brown sugar tone to it, and a certain amount of cinnamon also came through.

I also got a certain bread quality, which together with these "developed" other flavors gave it a sort of cinnamon french toast quality that I really liked.  Unfortunately, though, that fake cherry flavor still seemed to linger as well, and it just didn't fit. While the flavor softened, it still retained a bit of that medicinal quality that I do find off-putting, and it was really weird with that bready, yeasty flavor that developed.

All in all, if Jewel-Osco released another private selection of Buffalo Trace, I assure you I'd grab that as well.  While it has some off notes for me, overall it was still a tasty bourbon at a great price, and it was fun to see what I was going to get with such a pick.