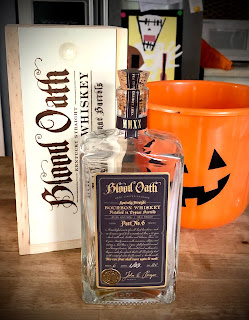 VITALS:
- $100
- 98.6 Proof
- Blend of 14, 8 and 7 years
- Pact No. 6
- Kentucky
While I, like most people, absolutely love it when my whiskey comes in a nice wooden box (said tongue firmly planted in my cheek), that alone was never enough to convince me to buy Blood Oath bourbon. It was all just too gimmicky for me -- fancy wooden box, proofed down to 98.6 degrees because, you know, blood, and finished in one manner or the other. That's all not to mention that reviews on previous batches have been pretty mixed, and for the price, I just wasn't willing to take a flier.
However, this year's Batch No. 6 actually seemed to get pretty solid reviews across the board, with some touting it as their best release yet. And, given that it was finished in Cognac barrels (a finish that I've found hard to resist), I finally pulled the trigger and got myself a bottle. I figured at the very least my son would be happy to get a cool new wooden box out of it.
The nose on this was rich and aromatic, hitting me with a healthy mix of leather and toffee. It also had some nutty and oaky notes to it as well, showing a bit of the age of the oldest of the whiskeys in the blend. There was a nice layer of vanilla to go along that rounded things out. It wasn't all rich dessert-like notes, though, as I also got some citrus and some dark notes, kind of like a mix of apricot and plum.
The palate really matched the nose, but interestingly the flavor that seemed to really stand out was a dried apricot note. Right up front I was hit with that bright yet somewhat subdued dried apricot which mixed well with the oak notes and with the bit of leather that I also got on the nose.  It had sweetness as well, with a distinct toffee note throughout, as well as a sweet granola note, kind of like those crunchy Nature Valley granola bars.
Not to belabor the point, but the dried apricot was really the star of the show here. It mixed so well with those richer, sweeter notes, and it provided balance to those earthier notes. It also seemed to play off the notes of plum and raisin that seemed to jump in the mix from time to time.
The finish was long and lingering, with the notes of toffee and apricot sticking around for quite a while. A mild anise note came through on the finish as well, most notably on the last few pours. It was just enough to make it enjoyable and didn't cross that line of being a turn-off flavor for me.
Consistent with the gimmick, I finished off the last two pours on Halloween night. It seemed apropos.  Gimmicks aside, though, this was an absolutely delicious whiskey, and I'm so glad I decided to go ahead and grab one. I thoroughly enjoyed every last drop!
Grade: A
Posted by Brian Zeeck at 4:30 PM