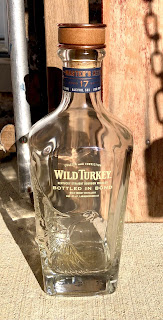 VITALS:
- $190
- 100 Proof
- 17 Years
- Kentucky
It seems as though the Master's Keep Collection from Wild Turkey has been gathering some steam these past couple years from a bourbon hunting perspective. The first couple releases in this series seemed to sit on the shelf for quite a while. In fact, I was still seeing them up until last year. My guess is that the price has always been a bit prohibitive (that and the fact that it's not a Buffalo Trace product).  Lately though, they've seemed to move pretty quickly. Perhaps it's a matter of the bourbon market catching up with the price of these releases.
When this 17 year bottled in bond bourbon was announced as the next in the Master's Keep line, I was pretty excited. And so were most people on social media. While Cornerstone had some anticipation, this was one that people were actively planning on chasing down. And so, I was quite thrilled when I was able to land one, even at the price. I've loved everything from this line to date, so I wanted to make sure to get this one, hype or not.
As would be expected with a 17 year old bourbon, the first note I got off the nose was oak. It actually smelled dry, if that makes sense. Perhaps I was picking up on the oak tannins on the nose. However, I also got some sweeter, richer notes of caramel and burnt sugar. It also had a nice peppery spice as well as a bit of orange peel to add some bright bitterness.
Much like the nose, I got a significant amount of wood on the palate. It wasn't over-oaked, though. Rather, that was just the character of this particular bourbon, if that makes sense. I appreciate a certain amount of oak in my bourbon, something to counter some of the sweetness. While this was on the oakier side, it didn't cross that threshold of being too oaky.
Beyond that, it came across as very complex, with a lot of rich, delicious flavors all working with one another. There was a significant amount of dark cherry, as well as some rich amaretto notes. Both these notes played very well with the wood notes.
I also got coffee notes, adding a somewhat different bitter quality, along with some anise and cinnamon spice. Even the orange peel that I was getting on the nose made its way into the show from time to time, adding a bit of brightness.  It was full of flavors that are associated with sweetness, but without being sweet itself. It even had a vanilla bean undercurrent to it, without taking on that sweetened vanilla note.
The finish was mostly cinnamon and even a bit of black pepper. Toffee notes also carried through on the finish, along with a touch of leather. It wasn't a very long finish, but it was full of flavor and I didn't wait very long to take each next sip anyway.
I really loved this whiskey. If you're not a fan of oak, you might not like this, and you probably won't want to spend the money on a bottle. However, if you do like a good, oaky bourbon, this might be right up your alley. It was full of rich flavors that seemed to complement that oak note in a way that made this bourbon interesting and ultimately delicious.
Grade: A
Posted by Brian Zeeck at 4:00 PM