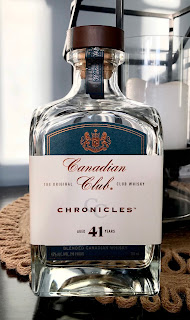 VITALS:
- $250
- 90 Proof
- 41 Years
- Canada
It's totally a stupid thing, but for quite some time I always had as one of my whiskey bucket-list items to drink a whiskey that was older than me.  I called it a bucket-list item, because for the most part that limited me to single malt Scotches, and it put me into the thousands of dollars for a bottle. It was honestly just something fun to consider but nothing I really thought I'd ever get the chance to do.
Then Canadian Club came out with Chronicles - a 41 year Canadian whiskey (I was 39 at the time) to which small amounts of Cognac, rye and sherry had been added. So it wasn't necessarily a "straight whiskey," having these additives. But, what it did have was a fairly reasonable and certain attainable price point and availability. Even then I wasn't necessarily sold, but when I got a very nice bonus at work, I yielded and decided to treat myself, and to check off that bucket-list item.
The nose in this was both sweet and bitter. It had a bright, jammy raspberry note to it, but also had that accompanying tartness of fresh raspberries. I also got notes of vanilla and peach, and it reminded me a bit of a fruit tart in that respect. However, there was also this sort of grassy, straw-like note, a bit of earthiness to keep it from getting too crazy.
As for flavor, the first thing I noticed was the sherry. I have no idea how much sherry had been added, but that raspberry-esque flavor I so often associate with sherry finished whiskeys was up front and center.
Once I got past the initial sherry hit, though, I got more confectionary flavors, like a smooth caramel that was mixed with a bit of burnt orange and even cooked peach. It almost took on a cobbler-type flavor. It even had a good buttery flavor to it to kind of round it all out.
On the back end I got the slightest amount of wood.  I really expected a lot more. In fact, given the very light straw color of this whiskey and the lack of significant wood influence, I would never in a million years have guessed this was aged for 41 years. The finish also hit me with a distinct note of unsweetened peach tea. It was bitter, but had just a little bit of sweet brightness added by the peach.
Unfortunately, throughout each sip I took I did get a consistent note that did put me off a bit. It was a fake sugary flavor, almost like artificial maple syrup and brown sugar, the same type of flavor you get from similarly flavored oatmeal packets. While I like it just fine in oatmeal, it didn't work for me in whiskey, and it was just always kind of there.
Overall, I love that I got to drink a whiskey that was older than I am, and that I was able to do so without absolutely killing my budget. However, when the 42 year is released, and each subsequent release thereafter comes out, I don't see myself opening up my wallet to get a bottle. This one served its purpose.
Grade: B-
Posted by Brian Zeeck at 5:00 PM