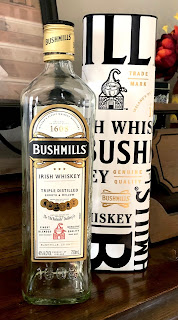 VITALS:
- $18
- 80 Proof
- NAS
- Ireland
This seems like a bit of a weird review, only for the fact that this is a whiskey that everyone has probably tried at some point. It'd be kind of like reviewing Jameson or Jim Beam White.  It's not like anybody is going to make a purchasing decision based on a review of Bushmill's. That being said, I've always maintained that I write this blog more as a journal for myself, as opposed to for the benefit of others. After all, as I've said in the past, reviews are stupid.
But, this was a gift for boss' day. I'm not one to turn away any whiskey, and I knew I would eventually polish off this bottle at some point. So, with an empty bottle of a whiskey that has yet to make an appearance here on this blog, not to mention the fact that my Irish whiskeys are few and far between, I decided to nonetheless write this one up.  So here goes . . .
On the nose the very first note I wrote down was oatmeal raisin cookie. This was exactly where my mind went as soon as I smelled this. It had the softness of the oat grain, the sweet brown sugar as well as the rich fruity raisin note. I also got some other aromas, though, particularly in later pours after this sat for a while, such as black pepper and nutmeg, and even a bright apricot note. At times I also got a kind of a white wine note, like a chardonnay.
As for flavor, this comes across as very sweet and, particularly given the low proof, very easy to drink. I didn't get the oatmeal raisin cookie so much as I did a mouthful of honey with a light citrus lemon note.  Perhaps this would be good for soothing a sore throat?
The bright apricot and black pepper were also present, mingling with a layer of vanilla bean that made it far more interesting and tasty than I expected when I first received this bottle. It also had a crackery note to it, albeit a plain on, kind of like saltines.
The finish came across as a bit peppery, and the honey lingered as well. However, I also got something very weird on the finish that really turned me off. I likened it to a mix of cardboard and soap--oddly two flavors that I think most people might actually be able to relate to. I know I've tasted both. While it wasn't overly offensive, it just wasn't great.
All in all, this is fine, and if presented with limited options, I'd be fine choosing this.  But overall, I'm not likely to buy another bottle myself, particularly with that weird finish.
Grade: C
Posted by Brian Zeeck at 5:00 PM