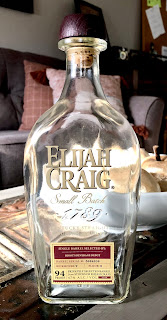 VITALS:
- $30
- 94 Proof
- NAS (10 Years)
- Barrel No. 5684209
- Kentucky
I feel like more and more I've been finding some incredibly solid bourbons at some incredibly affordable prices with the Elijah Craig store picks. They are usually priced around $30, and the last few that I've had have been really good.
Binny's usually gets these in batches, though, and when they got this last batch in, I had my eyes on other things. I still wasn't going out of my way to pick these up. However, the spirits manager there informed me that this particular barrel was a 10-year bourbon (the oldest of this batch of picks they got in). And so, just like that he sold me on it. I really am an easy sale, though.
The nose was interesting, and certainly off profile for Elijah Craig. I got some brown sugar as well as a bit of almond that leaned a bit towards amaretto. I even got an interesting peanut butter note. What was a touch odd, though, was that I got a bit of cedar shavings. It reminded me of my kids hamster cages (at least when they've been freshly cleaned).  It wasn't a bad note, just a bit of an odd one.
Luckily, I didn't get that cedar shavings note in the flavor. I did get more traditional notes of cinnamon and caramel. There was even a nice dark chocolate flavor that worked really well with everything else. In this respect, it was more on profile with what I'm used to getting out of Elijah Craig. I also got a root beer flavor throughout that, while not prominent, was still really delicious and seemed to work well with everything else.
I also got a decent amount of cloves, and that flavor was most noticeable on the finish. That cloves note seemed to linger for quite a while. I was also getting a bit of orange peel, though, which added just a touch of bitterness to counter some of the sweetness from the brown sugar notes.
Just like the nose had a bit of oddity to it, though, so did the flavor. I got a sort of chalkiness. And by that, I don't mean in the texture, but a chalky flavor. I'm not sure how best to describe it, except that it tastes like the air after you smack two chalkboard erasers together. It wasn't a strong note, but it nonetheless stood out, primarily for its strangeness.
If it weren't for that weird chalkiness, I would have absolutely loved this bourbon. Luckily it wasn't a very strong note, and I had no problems whatsoever finishing this bottle, and enjoying every pour along the way.
Grade: B
Posted by Brian Zeeck at 4:00 PM